Renewable clean energy has been chosen as a Use Case for a global workforce database built on a Web3 “blockchain” platform by Competitive Edge Technology (CET). The Web3 platform is underpinned by Distributed Ledger Technology, often incorrectly termed “blockchain”.

The Use Case is considered urgent, not only for its’ potential to contribute to a reduction in climate change impact, but to enable Australia to take its’ place in the global science community researching ways of harnessing the sun’s energy to produce clean energy. Countries such as China, India, the USA, Europe, Japan, New Zealand, and the UK, are aware of the economic and political benefits of being the first to successfully deliver solar-based power on a commercial scale.

China plan to launch a megawatt-level satellite in Low Earth Orbit by 2028. According to reports “The satellite will be capable of generating 10 kilowatts and carry a solar cell array, microwave transmitting antenna, a low power laser transmission payload, a transmitting array and test power transmission across distances of 400 kilometers from orbit.” It is still highly likely that the energy supply would still be intermittent and subject to the earth’s shadow and rely on a form of energy storage to maintain supply continuity.

The Hunter Valley project has a longer term strategic objective and a shorter term pragmatic solution:

The Barrington / Hunter Valley Project is a Proof of Concept (PoC) to explore whether it is technically feasible to send microwave (or laser) solar beams from space using retrodirective electromagnetic beams to an optical rectenna on earth to produce electricity for industry and household needs. This approach is different to most other research in so far as it focuses on a micro approach for household consumption and microgrids distributed within geographically located regions defined by postcodes and geolocation (longitude / latitude) details.

China recently conducted tests applying power transmission over a distance of 300 meters using a payload aboard a small airship. That is slightly different to the tests preferred for the HunterValley PoC. The approach is more finely focused beams and would ultimately be applied to decentralised points within the Valley.

From a commercial perspective, the project leverages off current investment in solar panel arrays and creates a distribution platform that is multi-purpose and factors in the need for more time for the science and technology to evolve. In other words, if the PoC does not produce and immediate positive result it still lays the data network infrastructure for the future: If successful, a commercial-ready model will be created for global adoption.

In conjunction with the PoC a host data network of validated energy consumers will be included on the CET open data plug-in platform to migrate quickly from PoC to commercial operation. Network agent centric community governance validation rules ensures only genuine members are permitted to participate in the network.

The following is an outline of a proposed Proof-of-Concept (PoC) in the Hunter Valley for Space-based Solar Power, ground ecosystem and gravitational energy to supplement intermittent energy sources. As we progress from rooftop solar panels to power beamed from space it will be a complete game changer for renewable energy. 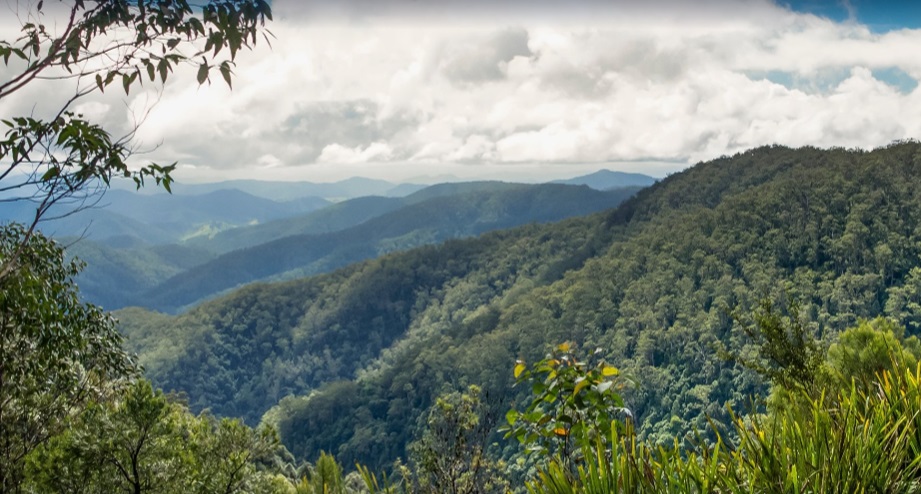 View of the rugged terrain in the Barrington region

The Barrington mountain ranges and Hunter Valley makes perfect sense to be the PoC location because it is the energy capital of NSW, is surrounded by a mountain range for Wireless Power Transmission testing, and already has an established power industry and workforce that will eventually need to transition from fossil fuel to a new source of electricity supply.

The Hunter Valley is the ideal setting for a Proof of Concept for the CET Holochain Data Platform and companies with an interest in Solar Power, both voltaic and space based, and Gravity Power utilising the high mountain ranges and disused mine shafts in the area.

Competitive Edge Technology is in a perfect position to set up the platform and network that would underpin the PoC. The company has already developed a peer-to-peer employee database prototype to lay the groundwork and identified companies in the region that would fit the criteria to participate in a PoC. The platform requires modern distributed ledger technology and Web3 readiness to support the PoC phases.

As a plug-in platform consumers have the option of selecting the type of energy they wish to subscribe to. That is, solar power, wind power, hydro power, waste-to-energy (methane gas), energy storage, etc. The technology for smart grids, virtual power plants, and energy storage utilities can share consumer data. 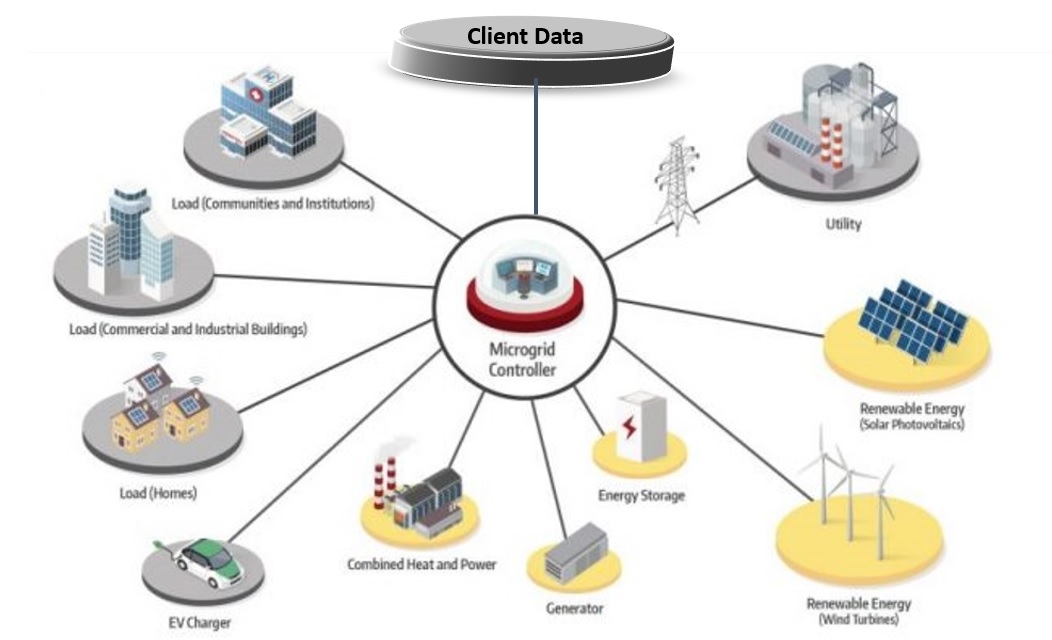 An entire energy system is not within the scope of CET. That is, generation, storage and delivery. It is the delivery component that CET has an important role to play in. Delivery involves transmission, distribution and retailing and each requires consumer data. CET’s workforce data platform potentially stores data for at least 80% of energy consumers. The various providers of service have a common customer and the integration capabilities of CET’s platform offers interoperability of business applications as well as the DLT (or “blockchain”) security and immutability capabilities.

The Use Case will explore the design of rooftop solar photovoltaic panels and the potential to use of optical rectennas to harvest light emitted from space in a more efficient and environmentally friendly way. It is not intended to use a satellite for the PoC but to simulate the beaming process between two points on earth. The process has already been done before by the New Zealand company Emrod and the US Naval Research Laboratory but the devices used to transmit and receive laser or microwave beams will be different.

Photovoltaic methods only deliver an intermittent solution due to cloud obstruction and night time “black out” and a poor efficiency rate due to navigation through earth’s atmosphere. The PoC will focus on antennas and diodes to receive beams rather than what orbit the space based power will be beamed from. The Low Earth Orbit using microwave or laser may offer a more efficient beaming function but would still be intermittent. The Geostationary Orbit could offer continuous beaming but there is a doubt about the economic viability of transmission and size of receiving antennas on earth. 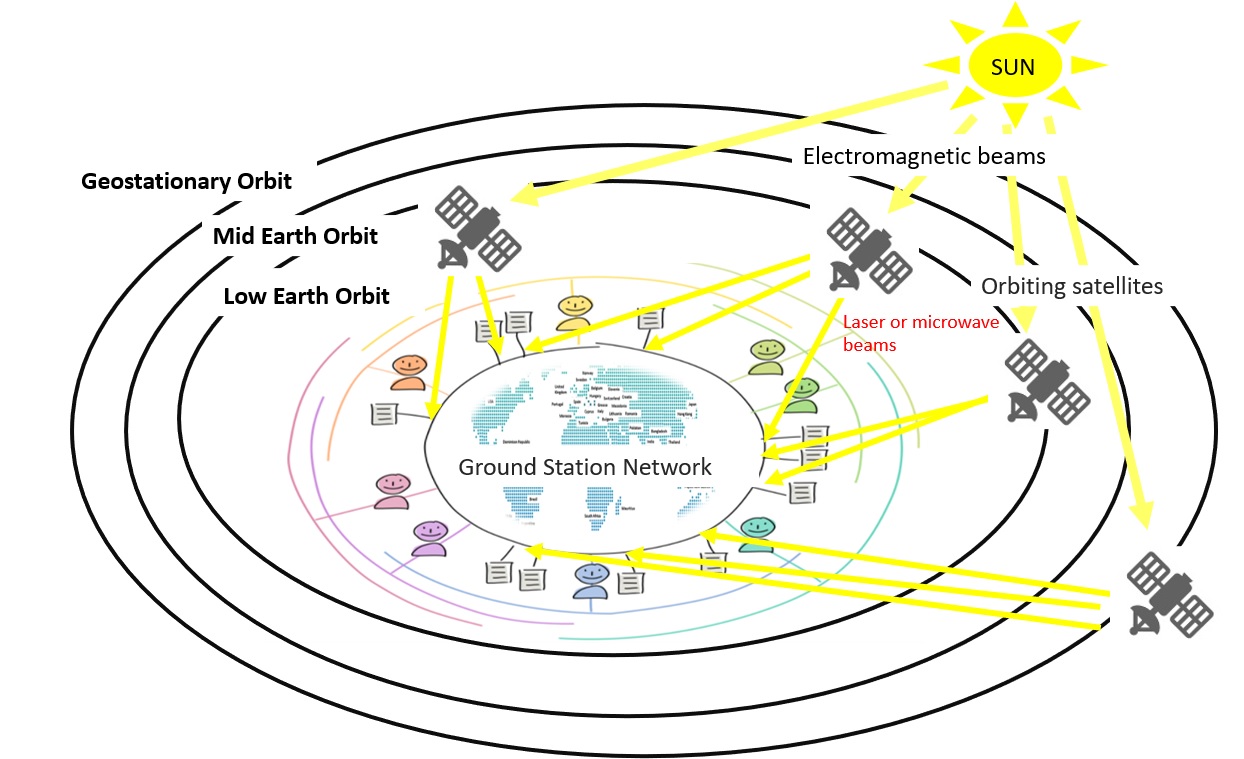 The most promising aspect of transitioning from solar PV panels to solar electromagnetic beam capturing optical rectennas is the possibility of using current investment in PV panel infrastructure. It may be as simple as reconnecting the source from the panels to a rectenna with minor modification and plugging into the wiring that takes electricity to the storage and distribution point. Plus, there is a possibility that the same rectenna can become multi-purpose and be used to connect to satellite communication for Edge Computing devices, along with 5G communication.

Gravity Power may be the solution to the intermittent “gap”. At present energy storage devices, such as nickel-cadmium and lithium-ion batteries, are commonly used to provide an option to main grid connection to close the “gap”. The battery storage solution is far from satisfactory and there are other environmental issues.

The use of gravity is not new but has been mainly used in the past for generating hydro power as water is pumped up to elevated heights and the downward gravitational flow turns large turbines to generate power. Companies around the world are looking to use abandoned mine shafts and heavy weights to achieve the same gravitational energy. The Scottish energy company Gravitricity is using old mine shafts and believe that 24 weights weighting a combined 12,000 tonnes when dropped down the mine shafts will generate enough energy to supply 63,000 homes. The process could be activated on demand and used at the time required. The Swiss-based Energy Vault is another company using a similar technique. They are using blocks weighing up to 35 ton and large towers to generate gravity power.

The Australian company Green Gravity is another player in the Gravity Power business. They have identified 175 areas of interest, including the Hunter Valley, to use their technique. Gravity Power is claimed to be half the price of lithium-ion batteries and can be used on demand to fill the void caused by intermittent solar supply.

The video covers this exciting new concept and why the Hunter Valley has been chosen for the PoC:

The Hunter Valley is totally suitable for the proposed Proof of Concept because of its’ links to the current power generation industry, numerous space science and research institutions, adaptable workforce, suitable terrain and existence of abundant disused mines for potential Gravity Power.