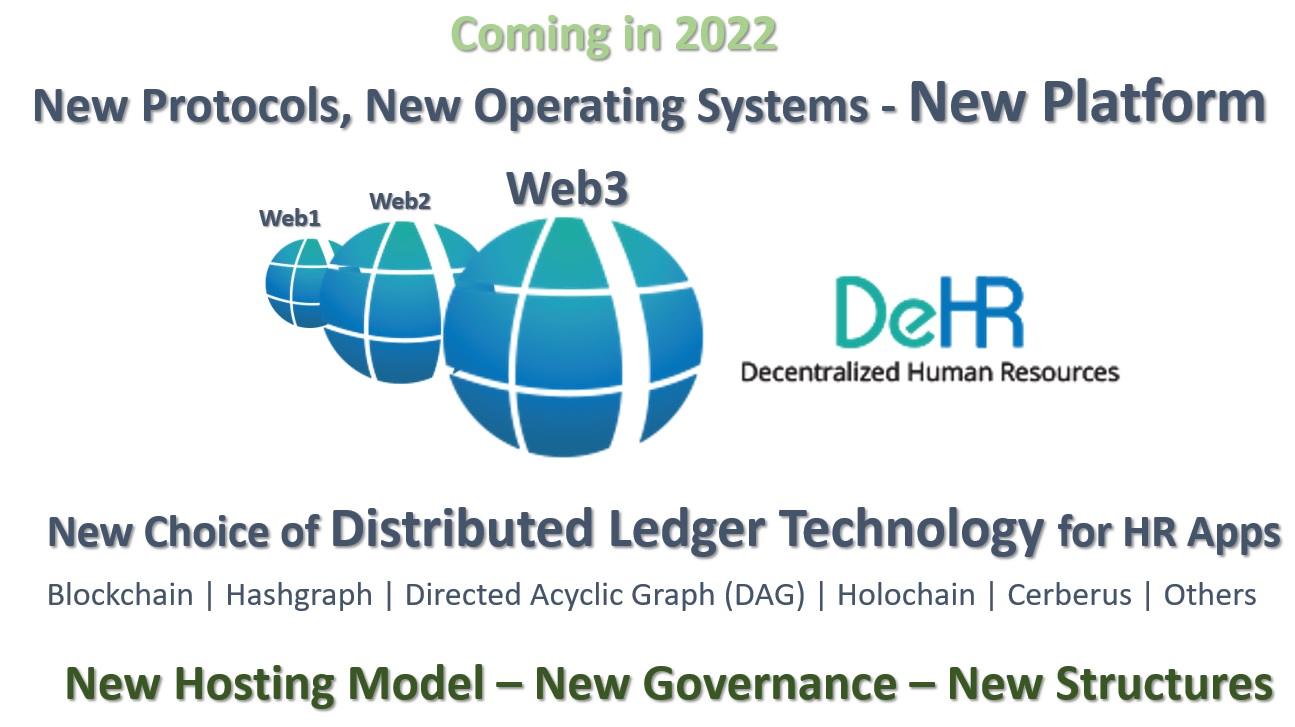 The Distributed Ledger Technology (DLT) chosen by DeHR’s technology partner, Competitive Edge Technology (CET), to create a platform for future HR applications and peer-to-peer hosting is Holochain. Enterprise participants in the network, approved by the DeHR Governance Group, will be eligible to install the CET application plug in framework and upload their employee data to the DLT.

True to the original spirit of the internet, Web1 was all about decentralisation. Its big innovation was the hyperlink, allowing any author to connect their work to someone else’s without permission. And because anyone could create web pages and run a server (if they had the technical skills), anyone could be a publisher.

Slowly and then suddenly, everyone wanted to join the web party — but not everybody had the technical skills. So Web2 built big servers and easy-to-use software, then invited the whole world. It spread out a generous banquet, offering the power to create not just documents and links but conversations, calendars, photos, videos, music, lists, diagrams, and more. And by getting us all together in the same room, it really did become a party — an explosion in our capacity to connect and interact with each other.

However, we know how the story has unfolded since then. Web2 looked like a good idea at the time, but it’s turned out to have a dark side. We appear to have become ‘the product’, as they say, not the authors of our own lives as we’d thought.

The centralisation that enabled the capture of our online lives is inherent in the design of HTTP, the protocol that powers the web. Over the years, more and more people have called for a re-decentralisation — a new web, a ‘Web3’ that avoids the mistakes of the original web by design.

Why do we need to reimagine the web? If the first web was already decentralised, why can’t we just go back to it? Moxie argues that the reason is simple: “people don’t want to run their own servers, and never will.”

Setting up a Holochain Server on a Peer-to-Peer Network

What if you could get the benefits of decentralisation for free while you used your normal, everyday apps and services? Well, Holochain can help — it neatly addresses all five barriers to running your own server. Here’s how.

There are still a couple centralisation points — the aforementioned proxy relay and a service called a ‘bootstrap’ are both hosted on remote servers. But they are about as irrelevant as Signal’s own servers are — they’re just places for peers to find each other and pass encrypted messages back and forth. Besides, you can always run your own, and you don’t even need them if you and your peers are in the same local network.

Holochain does all that! Its base protocol is versatile enough to build any sort of interactions people want to do online: social media, team productivity, currencies, carbon credits, micro energy grids, and so on. These are regular, real-world applications, not just applications that “[move] all aspects of life into an instrumented economy” as Moxie describes it. For these application protocols, we’ll soon be adding the ability for users to automatically download and activate an update — no manual steps needed.

Additionally, in contrast to Web2, where everyone is forced into the same experience, a Holochain application can give groups a choice about whether to accept protocol changes, while also being able to keep all their existing data. For instance, if a chat app releases an upgrade, one team in a company can upgrade because they want the new features, while another team in the same company can stay on the old version because they prefer the UI. They run the app; it’s their choice.

About The Governance Group

About The Microgrid Network

The Australian Microgrid Netwok is being developed as the global model

The Barrington Project is the Proof of Concept for microgrid hosting

The Space Based Solar Power justification is outlined on this page

About the Holochain, the HR Application & DLT

The employee owned data is made available in a mobile application

Distributed Ledger Technology is often referred to as Blockchain. There is a difference